“Why would you ever want to write a program that changes its code while it’s running? That’s a horrible idea!”

Yes, yes it is. So why do it? Because it’s a good learning experience, but most importantly, because I can.

Self-mutating programs aren’t useful for a whole lot. It makes for very difficult debugging, the program becomes hardware dependent, and the code is extremely tedious and confusing to read unless you are an expert assembly programmer. The only good use for self-mutating programs in the wild I know of is as a cloaking mechanism for malware. My goal is purely academic so I venture into nothing of the sort here.

Warning: This post is heavy on x86_64 assembly of which I am no expert. A fair amount of research went into writing this and it’s possible (almost expected) that mistakes were made. If you find one, please leave a comment or send an email so that it can be corrected.

The first step of writing a self-mutating program is being able to change the code at runtime. Programmers figured out long ago that this was a bad idea and since then protections have been added to prevent a program’s code from being changed at runtime. We first need to understand where the program’s instructions live when the program is being executed. When a program is to be executed, the loader will load the entire program into memory. The program then executes inside of a virtual address space that is managed by the kernel. This address space is broken up into different segments as illustrated below. 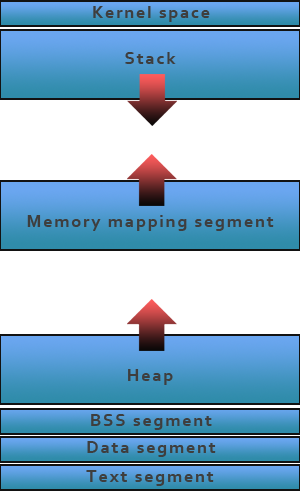 In this case, we’re only concerned with the text segment. This is where the instructions of the process are stored. Behind the address space are pages which are handled by the kernel. These pages map to the physical memory of the computer. The kernel controls permissions to each of these pages. By default, the text segment pages are set to read and execute. You may not write to them. In order to change the instructions at runtime, we’ll need to change the permissions of the text segment pages so that we write to them.

Now that we can write to the text segment, the next question is: what do we write?

Let’s start with something simple. Say I have the following function:

foo() creates and initializes a local variable, i, to 0, then increments it by 1 and prints it to stdout. Let’s see if we can change the value that i is incremented by.

To accomplish this goal, we’ll need to see not just the instructions that foo() compiles to, but the actual machine code that foo() is assembled to. Let’s put foo() is a full program so it’s easier to do this.

This is where things start to get interesting. We need to disassemble the binary gcc created for us to see the instructions that comprise foo(). We can do this with the objdump utility like so:

If you open the foo.dis file in a text editor, around line 128 (depending on the version of gcc used, foo may have slightly different instructions) you should see the disassembled foo() function. It looks like the following:

If you have never worked with x86_64 code before, this might look a little foreign. Basically what’s going on here is that we are pushing the stack down 4 bytes (the size of an integer on my system) to use as the storage location for the variable i. We then initialize these 4 bytes to 0 and then add 1 to this value. Everything after this (40054b) is moving values around to prepare for calling the printf() function.

Before going any further though, let’s break this instruction down.

Going further, we can break down the instruction to understand its operands:

Now that we understand the human readable form of the instruction, let’s dive into the machine instruction. All x86_64 instructions have the following format:

This is where x86_64 gets really complicated. x86_64 instructions have a variable length so to the unfamiliar, decoding instructions by hand can be a confusing and time consuming process. To make it easier, there are various documentation sources. x86ref.net has great documentation once you learn how to read it such as the reference for the addl instruction. For  the brave, there is also the Intel 64 and IA-32 Architectures Developer’s Manual: Combined Vols. 1, 2, and 3 (warning: 3,000 page PDF).

In our case, these bytes mean the following:

How did I determine what the ModR/M byte meant? There is a handy table in the documentation that explains what each ModR/M byte means. This table is also available in the Intel manual linked to above as Table 2-2 in section 2-5 of volume 2A (or page 445 of the PDF).

Moving right along, we now are able to change the instruction and know what to change; we just need to know how to change it.

Why not do both?

Let’s look at the objdump method first. The disassembly of foo() up to the addl instruction we’re interested in is:

We can confirm this by writing a short function to print the instructions of a given function. Here’s the modified program from above:

The output of running this:

We’re finally read to change some code! Given a pointer to foo(), we can create an unsigned char pointer to the exact byte we want to change as such:

Assuming we did everything write, this will change the immediate value in the addl instruction to 0x2A or 42. Now when we call foo(), it will print 42 instead of 1.

And putting it all together:

Running it gives the output:

Success! The first time we call foo() it prints 1 just as its source code says it should. Then, after we modify it, it prints 42.

And there you have it, a self-mutating C program. However, this is pretty boring, huh? All it does is change a number. Wouldn’t it be cool if we could change foo() to do something else entirely? How about exec() a shell? That would be cool!

How would we go about starting a shell when we call foo() though? The natural choice is to use the execve syscall, but that’s a lot more involved than just changing a single byte.

This code was taken from http://www.exploit-db.com/exploits/13691/ with two modifications by me as outlined below.

Before going further, let’s explain what the shellcode above is doing. First we need to understand how a syscall works. A syscall, or system call, is a function call to the kernel asking that the kernel do something for us. This may be something that only the kernel has the permissions to do so we have to ask it to do it for us. In this case, the execve syscall tells the kernel that we would like it to start another process and replace our process address space with this new process’s address space. This means that, assuming execve succeeds, our process is essentially done executing.

In order to make a syscall on x86_64, we have to prepare for the syscall by moving the correct values to the correct registers and then issuing with syscall instruction. These correct values and registers are unique to each OS. I’m focusing on Linux here so let’s look at the documentation for the execve syscall:

It’s important to note that the values of these registers should be pointers to the memory location of their respective values. This means that we’ll have to push all the values to the stack and then copy the correct stack locations to the registers above. And you thought you would never say “wow, I miss the simplicity of pointers in C.”

If you’re familiar with the C prototype for the execve() function (below for reference), you’ll see that how similar the syscall setup is to calling the function from a C program.

Now that we know how to set up a syscall, let’s explain each step of the shellcode.

Wow! That’s a lot of info. Thankfully, we’re ready to change foo() to execute this shellcode.

Instead of changing a single byte in foo() like before, we now want to replace foo() entirely. This looks like a job for memcpy(). Given a pointer to the start of foo() and a pointer to our shellcode, we can copy the shellcode to the location of foo() as such:

The only thing we have to be careful of writing past the end of foo(). In this case, we’re safe because foo() is 41 bytes long and the shellcode is 29 bytes. Note that because the shellcode is a C string, it has a NUL character at the end. We only want to copy the actual shellcode bytes so we subtract 1 from the sizeof shellcode in the length argument of memcpy.

Awesome! Let’s put it all together into a final program now.

Time to rub your lucky rabbit foot and execute this thing.

There you have it, a self-mutating C program.